Panthers trainer Pete Green has paid a heavy price for asking match officials to halt the game against the Eels when Mitch Kenny went down injured last Saturday night.

Green has been suspended for the rest of the 2021 campaign, while the Panthers have been hit with a $25,000 Breach Notice. The Breach Notice alleges Green stopped play incorrectly in the 76th minute.

A Head Trainer can only stop play after making an initial assessment that circumstances require a doctor to enter the field of play, but Green asked for play to be stopped before he had even assessed Kenny on the field.

NRL Head of Football Graham Annesley has confirmed the decision to penalise Will Smith for a high tackle on Liam Martin just before half-time in last week’s game between Penrith and Parramatta was correct.

He’s also backed the decision to penalise Marata Niukore for his off-the-ball hit on James Fisher-Harris.

However, Annesley has conceded that Jarome Luai should have been penalised for his interference on Mitchell Moses after Parramatta made a break down the sideline in the 67th minute.

He also confirmed Ray Stone knocked the ball on in the 70th minute, despite howls from Eels fans that the ball went backwards. 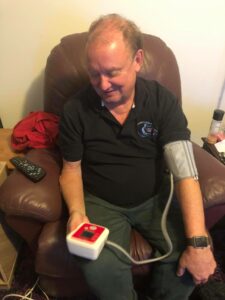 Medical check: Weekender production crew member Ian Beard (right) checking his blood pressure shortly after full-time last weekend. Like most of us, it was through the roof!

It was interesting to note Panthers CEO Brian Fletcher’s confidence this week about the club re-signing Viliame Kikau.

“We’re very confident that we will be able to come to an agreement with his management and have him on the roster for another three or four years as well. Every indication is that he’ll be staying,” Fletcher told Sky Sports Radio.

He’s far more confident than Chairman Dave O’Neill was in his comments to the media a few weeks ago.

I’m still hearing Kikau will test his value on the open market, which means he won’t re-sign until after November – if he does at all.

Where to next for Dylan Edwards?

Another player off-contract at the end of next seasons is Dylan Edwards.

While the 25-year-old has a chance to prove his elite status against the Storm on Saturday and then potentially in a Grand Final, I have no doubt that some questions will start to be raised should the Panthers exit this weekend.

Edwards is a great player, but whether or not Penrith need someone more explosive at the back is potentially something worth questioning. It’s likely to be part of the conversation if this Panthers team doesn’t go all the way this year.

Can Cleary hold on in Dally M race?

The Dally M Player of the Year is set to go down to the wire, with Penrith captain Nathan Cleary taking a one point lead into the final six weeks of the competition.

Points for rounds 13 to 19 were revealed on Monday night, with Cleary finishing round 19 on a total of 24 points. Manly’s Tom Trbojevic is closing fast, and sits just one point behind Cleary.

The major Dally M winners will be announced on Monday night in a broadcast on Fox League.

“Come on, throw something at them!” The words of Fox League commentator Michael Ennis, urging on the Parramatta Eels in the final minutes against Penrith last Saturday night.

Anyone would have thought Ennis had blue and gold blood flowing through him!