The man who killed four-year-old Lauren Hickson in Emu Plains almost 30 years ago could be released from prison next month.

Neville Towner, who was sentenced to life for the horrific murder of the young girl, will face a parole hearing on June 13.

The State Parole Authority has contacted Lauren’s family, notifying them of its intention to grant Towner release.

In May 1989, Towner attempted to rape four-year-old Lauren, bashed her head with a river stone and then drowned her. Towner was known to the Hickson family.

“Lauren’s body was found yesterday morning in a stream just 300 metres from her home in the Nepean Caravan Park at Emu Plains,” the Herald’s story said. 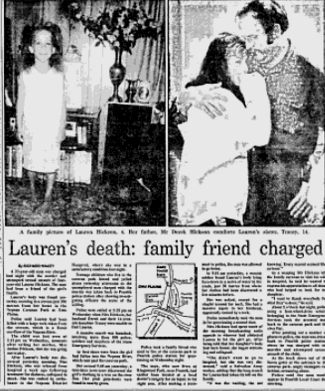 “Teenage children who live in the caravan park hissed and yelled abuse yesterday afternoon as the unemployed man charged with the murder was taken back to Penrith police station after showing investigating officers the scene of the killing.”

Steve Ticehurst was a Detective Senior Constable with the Homicide Squad, Major Crimes Squad North West Region and the lead investigator on the Lauren Hickson murder.

He spoke to the Weekender back in 2013, when we first reported on the possibility that Towner could one day be a free man.

“The Towner case was an absolutely horrific murder… and the family are scared if Towner is allowed out,” he said.

“It is my opinion and my opinion only that if a person takes a life, then they do not deserve to be released. Lauren has been robbed of having a life, a family, children. Why should anyone who takes that away from someone be given their freedom. But I just don’t see the system changing… how many more lives will it take?”

The Sunday Telegraph reports today that Corrective Services Commissioner Peter Severin has decided to join Lauren’s family in opposing Towner’s release at the hearing next month.

Lauren’s mother Jurina said he did not deserve to have his freedom.

“I’ll never forgive him while I’ve still got breath in my body. The murder was so horrific. He sexually assaulted and tortured her.

“I just can’t understand why a prisoner of his calibre is going to get a get-out-of-jail-free card.”