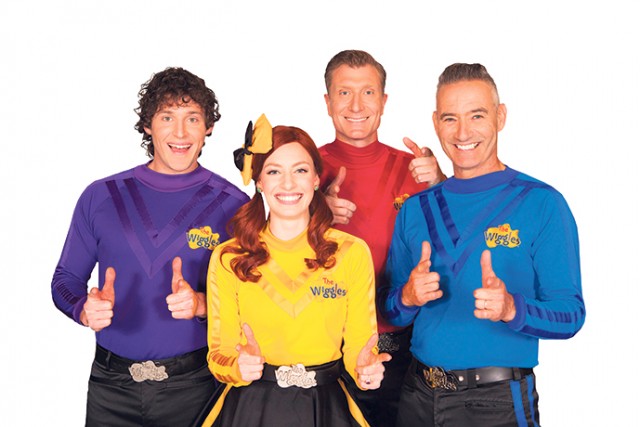 It’s hard to believe it’s been 25 years since The Wiggles first wiggled their way onto our TV screens.

It’s also hard to imagine any other children’s entertainment group that have reached pop cultural icon status quite like The Wiggles have, not just in Australia but around the world.

While blue skivvy wearer Anthony Field is the only original member still performing regularly with the group, the more recent recruits seem to be settling in very nicely.

“I think at the start it was quite overwhelming, because I think naturally you look at all the incredible things that the original four did,” said purple Wiggle Lachlan ‘Lachy’ Gillespie, who took over singing (and sleeping) duties from Jeff Fatt in 2013.

When the Weekender spoke to Lachy he had just come off stage from the first of three ‘The Emma Tour!’ shows that day, in which Lachy plays support to his now fiancé, yellow Wiggle Emma Watkins, who joined the group at the same time as Lachy and red wiggle Simon Pryce.

The public reception to the first female member of the The Wiggles has been so overwhelming that the ‘Emma!’ TV show was created, as well as a 45 minute live show.

“We saw it in The Wiggles touring show, it was crazy how many people come to the show dressed up as Emma, which is what gave us the idea in the first place,” Lachy explained.

Along with ‘The Emma Tour!’, the wiggly foursome will be heading to the EVAN Theatre next month as part of their ‘Wiggle Town Tour’.

Lachy describes the new ‘Wiggle Town’ album as “our best yet” and says that one of the highlights was working with English comedian and writer Ben Elton, who wrote the lyrics for the track ‘The Wonder of Wiggle Town’.

“He was absolutely incredible to work with,” Lachy said.

“We write basic lyrics that the children understand, but it’s quite incredible when you get a writer of his calibre to write some lyrics.”

In celebration of their 25th anniversary, the original Wiggles – Anthony Field, Jeff Fatt, Greg Page and Murray Cook – will also be doing a special over 18s show, with on stage support from their newest recruits.

“Every time we’re out with Anthony he’ll still get people in their late 20s and a bit younger come up and say, ‘oh my God, you were my childhood, I absolutely loved you guys’,” Lachy said.

“I think it’s the whole reminiscing thing, it’s remembering that awesome time when they watched it on VHS.”

The response on social media to the anniversary gig has been huge, and Lachy admits he is looking forward to the show as much as the thousands of adult fans that have grown up with The Wiggles.

“I actually can’t wait. I’m just going to stand up the back and have an absolute ball,” he said.

“I want to hear Greg sing again, he’s got the most beautiful voice, everyone says that, they just remember Greg’s voice from the records.

“We’ll definitely have to do a few more because I think people really want to see it.”