These are the dramatic pictures that threaten to derail the Western Sydney Wanderers’ premiership celebrations this weekend.

With the Wanderers likely to claim the Premier’s Plate in their debut season by beating Newcastle on Friday, the focus remains on the behaviour of a small number of fans at last Saturday’s clash with Sydney FC at Parramatta Stadium.

Of huge concern to police is footage, obtained by 2GB broadcaster Ray Hadley, showing frightening scenes outside a Parramatta restaurant, in which Wanderers fans clearly intimidate patrons by yelling, chanting and swearing. A plate and a glass were also thrown, hitting a Sydney FC fan.

It comes as photographs, taken by The Western Weekender inside Parramatta Stadium, show flares being set off and members of the crowd being arrested. In one photograph, a man being arrested clearly spits at a police officer.

The FFA said it condemned the actions of a “small number of troublemakers” attending the match last weekend.

“FFA thanks the vast majority of fans of the Wanderers and Sydney FC for making the Hyundai A-League’s third Sydney derby a spectacular night for Australian sport,” Head of A-League Damien de Bohun said.

“The sold-out crowd of nearly 20,000 provided a huge amount of colour, noise and theatre, and the overall behaviour was exceptionally good.

“FFA will continue to work closely with NSW Police, Stadium security and our security consultants to identity and exclude troublemakers.” 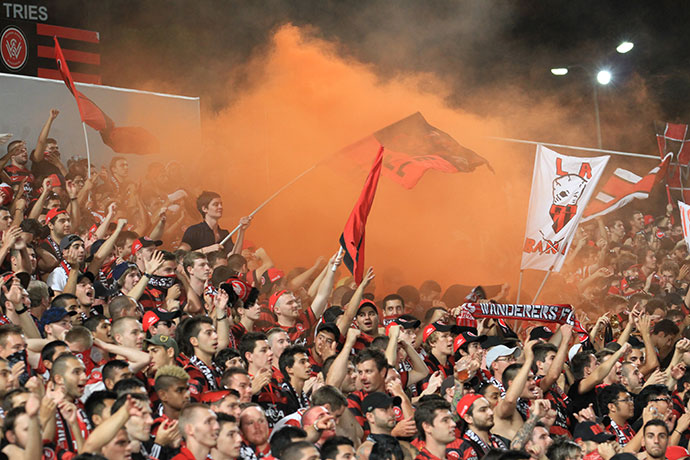 “These people give up the right and the privilege to go and watch a game when they carry on like that.”

Mr Scipione promised that extra officers would be employed at Wanderers matches in the future if required. He also confirmed some 14 flares were let off inside Parramatta Stadium.