It may only be round four, but this Sunday’s clash between the Panthers and Titans at Penrith Stadium could very well be a defining one for the home side.

With just one win from their opening three matches, the Panthers enter an awful fortnight on the road after this weekend’s game, facing the Cowboys in Townsville and the Knights at Hunter Stadium. Should the side lose on Sunday and come back from those two road trips winless, the statistic “one from six” does not sound sweet at all.

The big question mark hanging over Penrith this weekend is how much they take from the second half performance against Souths last weekend, in which thanks to a vocal home crowd they almost produced the upset of the season so far via a remarkable comeback.

Fans can only hope that the 35 minutes of brilliant football inspires such performances for the rest of the season, or at least such spirit and belief.

Whilst last weekend’s game against Souths showed just how far Penrith still has to go to be a competitive force in the NRL, it also showed how far they have come under coach Ivan Cleary.

Much of what Cleary has tried to instil at Penrith is a “believe in yourself” attitude. There is no doubt that during the fightback last Sunday, Penrith suddenly believed. The power, dominance and force of Souths simply didn’t matter, and the result was falling just painstakingly short of taking the lead into the final minutes of the game.

“Like everybody, we’re just trying to get consistency,” Cleary said post-match.

Despite criticism, Luke Walsh must believe he can match it with any halfback in the game. Dean Whare must believe that nobody has a chance of getting past him, and that he can chase anyone down – no matter how fast or strong they may be.

Self-belief plays a big part in attitude, and in the way teams perform as a unit. We saw last Sunday what self-belief can do, but Penrith must dig much deeper to find it for 80 minutes and not just when adversity rears its head.

Find the self belief, find the confidence, and you find victories. It is the type of attitude that builds successful teams. 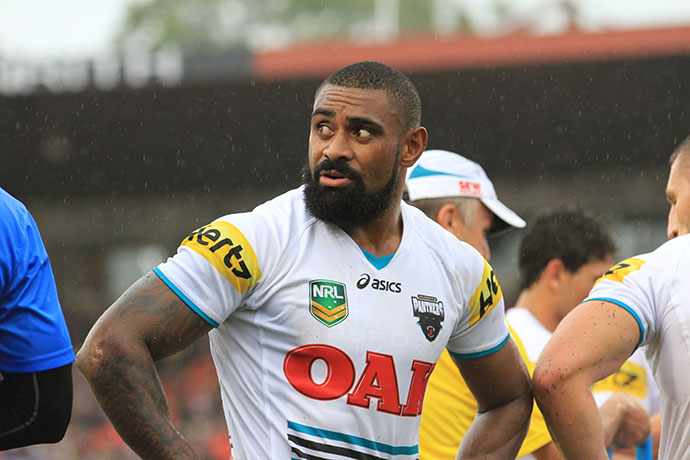 PROBLEMS ON THE RIGHT

Penrith’s biggest problem on the park at the moment is the right side defence, with David Simmons and Wes Naiqama providing little fight.

Both Simmons and Naiqama will continue to score points and hence will stay out of the spotlight as far as their week-to-week performances are concerned, but coach Cleary would surely be worried about teams targeting the right side.

Naiqama missed four tackles against the Rabbitohs, and Simmons missed two, but the ease in which Souths scored on that edge of the field put up the red danger lights for future weeks and invited future oppositions to try the same tactic. Surely the Titans will find their way down that right side a few times this weekend.

Fans were this week left confused as to why Simmons and Naiqama stayed in the side, but Nathan Smith found himself back to an extended bench to make way for Cameron Ciraldo.

Make no mistake, this is a crucial game of footy for the Panthers and a potentially season-defining 80 minutes.

Whilst Souths were always going to be tough, the Titans provide a slightly easier opposition, and it’s a big test for Penrith’s attitude, ability and, as mentioned earlier, the self-belief of the players.

It’s far from make or break, but a loss could have big consequences.