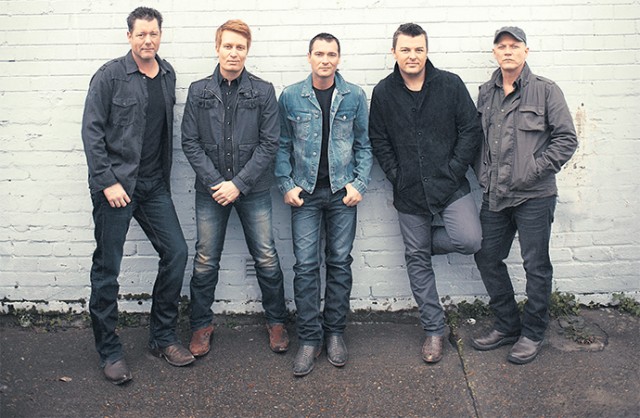 Adam Brand and The Outlaws are here for a good time, not a long time.

The all star band, which includes country music artists Adam Brand, Drew McAlister, Travis Collins, Matt Cornell and Mike Carr, have no plans for the future. Their aim is to get loud, rock out, and leave audiences with a grin from ear to ear.

“It was put together with the idea that it would be great to go out and do it just this one time,” Adam Brand said.

The idea for the super group is one that the country music star had been tossing around for more than a decade.

Adam’s plan – which was simply to get a bunch of country music mates together for one killer album and tour – wasn’t an easy one to coordinate, with all five members being busy in their own right.

“All these guys have had albums out and do their own gigs in their own right, so to put them all into one band is quite unique,” he said.

Though Adam’s name is out front, it’s been a team effort all the way with Adam, Drew, Travis, Matt and Mike all sharing singing duties.

“Sort of like a country music boy band?” this writer suggests.

“Yeah but without any cool moves,” Adam laughed.

The band – whose name is a tip of the hat to the original outlaws of country music including Johnny Cash, Willie Nelson and Waylon Jennings – are currently touring their debut (and possibly only) album which features a mix of covers from Jet’s ‘Are You Gonna Be My Girl’ to Jimmy Barnes’ ‘Working Class Man’.

While the guys are known for their country roots, the album features plenty of rock tracks including Queen’s ‘Fat Bottom Girls’ and Poison’s ‘Nothin’ But A Good Time’.

“Our music, where it sits in the country music genre, has always been sitting close to that rock and blues edge of country,” Adam said.

Deciding on the tracks that would feature on the album was simply a matter of getting together a list of songs the band members loved.

All five members joined in on a jam session, offering up their favourite tracks for consideration.

“There was no rules, we just threw the songs in the pot that we just love,” Adam said.

“The kind of songs that you’d put on a playlist if you were going on a long road trip and you just wanted something in the car so that you could wind the windows down and sing along with the wind in your hair.”

This love of all things fun has permeated Adam’s career, and features heavily on the country music star’s next album, which will begin recording after the Outlaws tour wraps up.

“I just find that people want to be entertained,” he said.

“I’m really just enjoying going out and entertaining people. Having people come away smiling and going ‘you know what, I really needed that. I’ve been going through a really crappy time and I just needed to come out and just let my hair down and forget about the world’.

“There’s a lot of that coming through in my new album.”

Adam Brand and The Outlaws will be performing at the Rooty Hill RSL on Saturday, March 19 at 8pm. Tickets are $40. For more information or to purchase tickets to the show, visit www.rootyhillrsl.com.au.