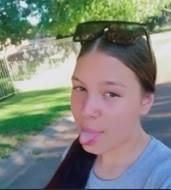 Police have appealed for public assistance to locate two girls missing from Luddenham.

Charlotte Kinloch, aged 11, and Tori Carr, aged 15, were last seen at 5am yesterday at a home on The Northern Road.

Charlotte is described as being of Caucasian appearance, 175cm tall, large build, shoulder length brown hair, with a nose ring. She was last seen wearing a shirt, possibly black in colour. It is believed the girls are travelling in a silver KIA Sportage, NSW registration DQZ-47S, which was reported stolen yesterday.

There are serious concerns for Charlotte and Tori’s welfare due to their young age.

Anyone who sees the girls, or knows of their whereabouts, is urged to contact Nepean Police or Crime Stoppers.