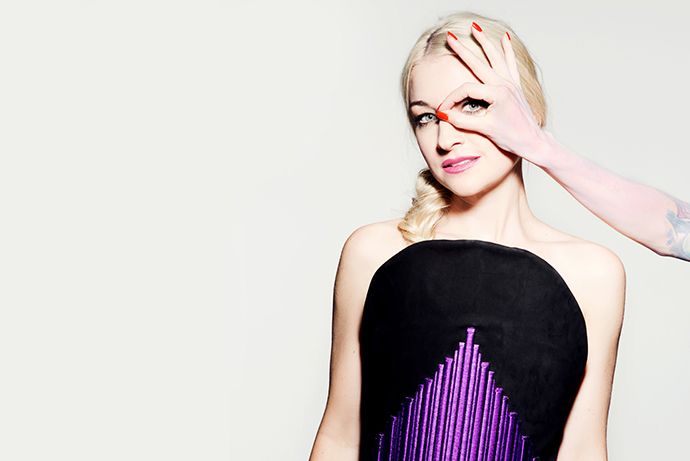 If you read enough articles about music you’ll start to notice the same words used many times over to describe different artists. That’s why it’s refreshing when you come across a phrase like the one best selling author Neil Gaiman used to describe singer/songwriter Kate Miller-Heidke. After hearing Kate’s voice Gaiman said it was like “being f****d by butterflies”.

“It was excellent and that’s probably one of my favourite comments as well,” Miller-Heidke said.

“It’s so supremely evocative. You can’t help but feel a bit of a fluttering,” she laughed.

Kate Miller-Heidke is very much deserving of such a description. She uses her classically trained voice to add an operatic element to her alt-pop music, but it’s not all beauty and light.

“I guess I have a relatively experimental approach to using my voice and I’ve probably got a bigger range of dynamics and tones and just fun stuff to use my voice as an instrument and play around with it,” she said.

“I think I probably do that more than most other singer/songwriters, particularly in a live context, it’s fun to use those textures to kind of freak people out,” she laughed.

Miller-Heidke’s performances are theatrical, intriguing and beautiful, and come August the talented songstress will be bringing her live show to the Joan Sutherland Performing Arts Centre.

“I always play in Sydney but I just want to make sure I’ve got the suburbs covered,” she said.

Joining her will be her full band, which includes husband and musical soul mate Keir Nuttall.

The two have been long time collaborators and, as with any partnership, there’s positives and negatives to spending so much time together.

“I think because we know each other so well and you know we’re best friends we’re definitely on the same musical wave length and we can, onstage, we play together so much that we can almost communicate without words – without sounding cheesy,” Miller-Heidke said.

“But yeah obviously we send each other a bit insane and it’s nice to have the rest of the band and the crew as a bit of a buffer zone sometimes.”

The August tour will see Miller-Heidke performing tracks from her album ‘O Vertigo!’ which was released in March this year.

The album, her fourth studio release, came after her split with Sony. Miller-Heidke decided to produce the album using crowd-funding through PledgeMusic.

“It was incredible and yeah, the support I got through that was overwhelming. That was definitely a positive experience,” she said.

Though, Miller-Heidke seems keen to explore other avenues for future projects.

“I’m not sure if I would do it again next time. I think the world is changing so quickly and the music industry… it seems like it’s constantly in a state of flux. So who knows where we’ll be in six months,” she said.

“I don’t think I can go back and ask those same people for money again. I’m going to need to figure out a different plan next time,” she laughed.

After the tour Miller-Heidke will be heading off to the UK for a string of shows before she makes her way to New York in October where she will perform with the Metropolitan Opera.

The talented singer is also currently writing a children’s opera for Opera Australia.

“It’s a new opera, adapting a book by Shaun Tan called The Rabbits and yeah I guess they kind of just took a leap of faith in asking me but I’ve loved being involved,” she said.

While speaking to Miller-Heidke about the types of music and musicians that inspire her you start to see that her path was never going to be one that involved predictable performances or mainstream pop songs.

“I saw a guy called Kirin J Callinan. He’s from Sydney actually. I saw him perform last week at the NGV and it was absolutely electrifying. It was so dangerous and that was really thrilling to watch,” she said.

“I like music that transports me or tells a story. I really like the theatre. I’m going to see ‘Into The Woods’ next month, which I’m very excited about. So musicals are a big thing for me,” she said.

Though Miller-Heidke does have one dislike when it comes to live music.

“As I get older I don’t like stuff that’s too loud, sometimes sound engineers actually hurt my ears. It feels like I’m getting punched in the ears,” she said.

“I don’t like to be injured from watching a gig. That’s my main requirement,” she laughed.

The ever quirky and delightful Kate Miller-Heidke will be performing at the Joan Sutherland Performing Arts Centre on Saturday, August 16 at 8pm. Tickets are $59.